In 2015, the legislature refused to vote on the Missouri Anti-Corruption Amendment, proposed by conservative State Senator and RepresentUs Advisory Council member Rob Schaaf.

Three months later, a right-left coalition kicked off a signature drive for the Clean Missouri Amendment that would tighten contribution limits and lobbying gift laws, close the revolving door, increase transparency, and ensure no political party is given an unfair advantage in map-drawing.

After the hard work of the Clean Missouri campaign, voters in Missouri approved Amendment 1 in 2018.
Connect to the campaign
Missouri is part of the biggest wave of anti-corruption reform in US history.
Share Tweet Email Represent Us Missouri Volunteer Steve Davey is going door to door with our members today to fight back against corruption by supporting Clean Missouri, Amendment 1.Follow live results from all of the biggest anti-corruption campaigns across the country at represent.us/election2018

Redistricting reform measures, including Amendment 1, garner national coverage in publications such as Slate, The Wallstreet Journal, FiveThirtyEight, and more

We're on TV! Watch our new tv ad and then tell us why you support Amendment 1 to clean up Missouri politics.

Campaign continues to receive endorsements from conservatives, progressives, and independents 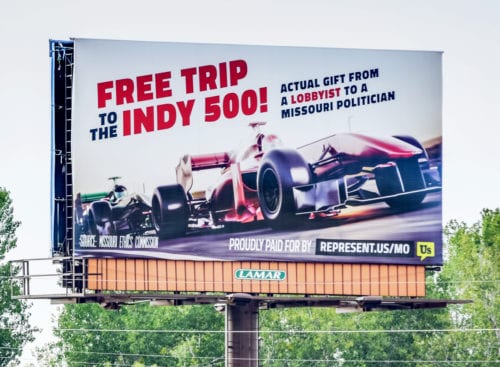 Represent Missouri takes out billboards on highways 50, 54, and 63, calling out ridiculous gifts from lobbyists to legislators

Clean Missouri rallies in St. Louis and Kansas City to defend the initiative as court begins to hear arguments Major newspapers, including the Emissourian and the St. Louis Post-Dispatch, endorse Amendment 1 Over 4,000 people sign petition to stop special interests from kicking Amendment 1 off the ballot Endorsements from the Washington Missourian editorial board and the St. Louis Post-Dispatch

State Rep. Galen Higdon backs the Clean Missouri amendment in a St. Joseph News-Press column, cites having “seen too many others at the Capitol serving other masters: big money special interests who contribute millions of dollars to their campaigns”

Sen. Rob Schaaf publishes an op-ed in The Kansas City Star in support of Clean Missouri Dave Robertson, political science professor at University of Missouri-St. Louis, describes his support for the amendment as a “nonpartisan way to push back against” the corrosion of American system of government in a St. Louis Post-Dispatch column Federal judge rules many of the 2016 campaign finance reform Amendment’s provisions unconstitutional, but keeps the contribution limits in place Clean Missouri files Amendment 1 with the Secretary of State Senator Schaaf’s proposed Anti-Corruption Amendment has committee hearing but fails to pass, dooming the proposal’s chances for the 2015 session