In 2016, a 27-year-old, self-described political novice named Katie Fahey posted to Facebook, calling for a volunteer effort to end gerrymandering in Michigan. Thousands heeded her call, gathering 425,000 signatures to place an initiative on the ballot that would create an impartial citizen commission to draw district lines.

The campaign was successful, and in 2018, Michigan voters approved Proposition 2 and put an end to gerrymandered districts in Michigan.

Connect to the campaign
Michigan is part of the biggest wave of anti-corruption reform in US history.
Share Tweet Email We're live with Katie Fahey of Voters - Not Politicians as we celebrate a historic win for Proposal 2 to end gerrymandering in Michigan! Follow all the biggest anti-corruption fights of this election at represent.us/election2018

Represent Metro Detroit members are getting ready for Election Day and the end of gerrymandering in Michigan! Proposal 2 is on the ballot thanks to thousands of volunteers and support from across the country. Learn more about Proposal 2 and the other big anti-corruption votes around the U.S. at represent.us/election2018

Redistricting reform measures, including Prop 2, garner national coverage in publications such as Slate, The Wallstreet Journal, FiveThirtyEight, and more

Ed Helms wants to talk to you, Michigan

Ed Helms is funny - and he knows that gerrymandering isn’t. Vote YES on 2 and spread the word!

Who calls the shots in Michigan? Vote YES on 2

Jennifer Lawrence wants you to spread the word on Proposal 2. 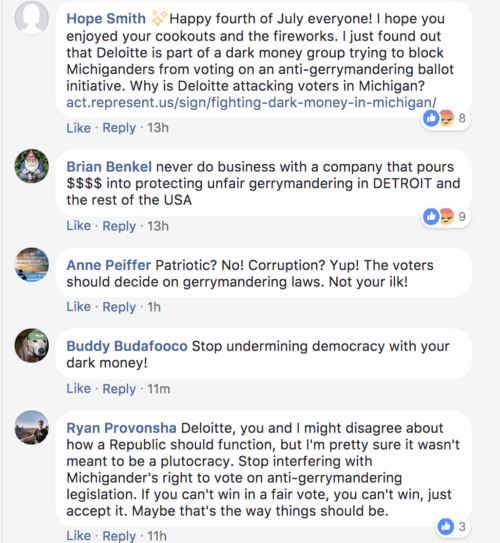 Chamber of Commerce and Deloitte make public statements responding to the campaign:

We run full-page ads targeting the Chamber’s Chair in his hometown papers, the Oakland Press and the Daily Tribune, and the Detroit Free Press, the largest daily paper in Detroit One post sparked a movement. And now we have the chance to take our power back from special interests and lobbyists. This November 6, it’s our chance, Michigan. Vote YES on Proposal 2.

Posted by Voters Not Politicians on Wednesday, October 10, 2018

We're live outside the Secretary of State office turning in signatures!

Posted by Voters Not Politicians on Monday, December 18, 2017

NPR: Voters Approve Major Changes To Redistricting And Other Voting Laws
Slate: The 2018 Election Was a Body Blow to Partisan Gerrymandering
The Washington Post: How the midterms altered the 2020 redistricting landscape
Michigan Radio: Redistricting proposal passes in Michigan
Detroit Metro Times: Gerrymandered no more: Michigan approves redistricting reform
Common Dreams: As Polarized As Americans Are, They Agree on This: Gerrymandering Is Wrong
Bridge: Proposal to end gerrymandering resonated in red and blue Michigan