What is the definition of lobbying?

Lobbying is attempting to influence decisions made by a public official — usually to pass or defeat legislation.

What is a lobbyist?

Lobbyists are professionals hired by a special interest group to represent their interests to Congress.

The term “lobbyist” harkens back to the days when people hung around in lobbies waiting to get a word in with legislators heading to vote.

All kinds of groups hire lobbyists — from corporations and private companies to nonprofits and unions — to try to persuade the government to pass legislation that’s favorable to them.

There is nothing inherently wrong with lobbying. Lobbying encourages people to play an active role in their government — it’s protected by the First Amendment as our right “to petition the government.”

The problem is when lobbyists use money to buy influence with our government. Lobbyists today funnel millions of dollars into the hands of Congress.

Because they’ve become dependent on money from lobbyists to fund their political careers, Congress ends up passing laws to keep the lobbyists and their clients happy, instead of laws that benefit the American people.

Those of us who can’t afford to hire a lobbyist or make big campaign contributions are out of luck.

A lobbyist can’t just walk up to a lawmaker with a briefcase full of cash and say, ‘Hey, Senator, I’ll give you $100,000 if you vote our way on this bill.’ But lobbyists can still give the congressmember $100,000—and much, much more—without breaking any laws.

If it seems like the government isn’t working for the people, part of the problem is they’re effectively being bribed, very often by lobbyists. Here’s how it works:

What do lobbyists do?

Getting into and staying in Congress takes a ton of money these days: On average, a candidate has to raise more than $14,000 a day, 7 days a week to win a Senate seat. And a candidate needs upwards of  $1.6 million to win a seat in the House. That’s a lot of cash to come up with.

Lobbyists come to the rescue! They don’t just donate directly to the candidate’s campaign fund, they also sponsor big fundraisers that raise tens of thousands of dollars for the Congressmember in a single afternoon.


“You can’t take a congressman to lunch for $25 and buy him a steak. But you can take him to a fundraising lunch and not only buy him that steak, but give him $25,000 extra and call it a fundraiser.”— Jack Abramoff, Former Lobbyist

Let’s say you’re a bank and you want a senator to vote your way. You can’t just give him $100,000 — that would be a bribe. People recognize giving someone large sums of money tends to lead to corruption, so it’s illegal.

Instead, you hire a lobbying firm. Your lobbyist can now throw a fundraiser and collect $100,000 for the senator’s campaign, then hand-deliver a fat check to him. No laws broken!

2. There’s a HUGE “Return On Investment For Lobbying”.

In 2017 alone, private interests spent $3.37 billion on lobbying — and they did it because they get an unbeatable return on their investment (ROI).

There’s actually a correlation between how much a company spends on lobbyists and how much they get from the federal government. This has been dubbed the “Return On Investment For Lobbying” (ROIFL) — and the number is mindboggling. 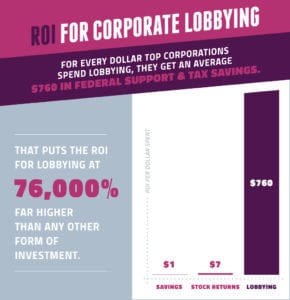 For every dollar top companies spend lobbying, they get an average $760 in federal support and tax savings. So the Return On Investment For Lobbying is 76,000%.

No, that’s not an extra zero (or two, or three) By comparison, a good savings account gets you about a 1% return. You’d be thrilled if your stock broker pulled in 7%. Maybe that’s why one NPR headline advised Americans to “Forget Stocks Or Bonds, Invest In A Lobbyist.” That’s irony, of course, since most Americans can’t afford a lobbyist.

The most powerful trick up a lobbyist’s sleeve may not even be campaign contributions, fundraisers, and lavish resort vacations. They have a way to promise members of Congress unregulated sums deposited directly into their personal bank account. How?

Lobbyists can offer a member of Congress a future multi-million dollar salary working at their lobbying firm.

This phenomenon — members of Congress becoming lobbyists — is known as “the revolving door.” And it’s become the rule rather than the exception.

Today around 50% of senators and 42% of representatives become lobbyists after leaving Congress.

How much do lobbyists make? Members of Congress who become lobbyists see their salaries increase on average 1,452%.

“I would say, ‘When you’re done working on the Hill, we’d very much like you to consider coming to work for us.’ The moment I said that, we owned them. Every request from our office, everything that we want, they’re gonna do.”— Jack Abramoff, Former Lobbyist

Sound corrupt? It is.

Can we ban lobbyists?

No. And we shouldn’t. Lobbying is not only constitutionally protected, it’s fundamental to a working Republic. Lobbying gives people the power to petition their government.

What if we overturn Citizens United?

Even if Citizens United were overturned tomorrow, it wouldn’t fix America’s lobbying problem. The Citizens United court ruling in 2010 allowed for the creation of independent political organizations (now called “super PACs”) that are allowed to raise unlimited amounts of money to promote a candidate, as long as they don’t coordinate with the candidate’s official campaign.

Citizens United concerns important aspects of conflict of interest in campaign finance law, but it has nothing to do with lobbyists.

Lobbyists could still donate hundreds of thousands of dollars to congressmembers’ election funds, throw them massive fundraisers, and offer them salaries to make a pro-football player blush.

Why would Congress fix the problem — they’re making so much money!

Congress won’t fix the problem. Members in Congress today are dependent on the rules of the game that brought them into power.

But that doesn’t mean the American people are powerless to change the laws.

Is there a solution to America’s lobbying problem?

In cities and states across the country, citizens are using a piece of model legislation called the American Anti-Corruption Act to root out conflicts of interest and corruption where they live. Time and again, history has seen laws passed at the city and state level make it all the way to Washington and turn into federal law.

The American Anti-Corruption Act enacts a broad base of reforms to put the kibosh on conflicts of interest, including provisions that:

When lobbyists use Big Money to get results in Congress, that's corruption.

With enough support, we can fix it. Add your name to support the American Anti-Corruption Act.